Can you imagine it? 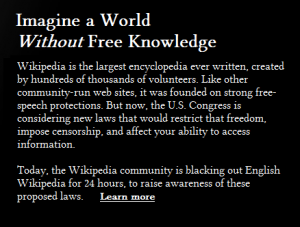 WHAT DO SOPA AND PIPA MEAN FOR YOU?

SOPA is an anti-piracy bill working its way through Congress, that would grant content creators extraordinary power over the internet, which would go almost comedically unchecked, to the point of potentially creating an “Internet Blacklist”, while exacting a huge cost from nearly every site you use daily.

[SOPA also includes an “anti-circumvention” clause, which holds that telling people how to work around SOPA is nearly as bad as violating its main provisions. In other words: if your status update links to The Pirate Bay, Facebook would be legally obligatedto remove it. Ditto tweets, YouTube videos, Tumblr or WordPress posts, or sites indexed by Google. And if Google, Twitter, WordPress, Facebook, etc. let it stand? They face a government “enjoinment.” They could and would be shut down. Here’s the other thing: Payment processors or content providers like Visa or YouTube don’t even need a letter shut off a site’s resources. The bill’s “vigilante” provision gives broad immunity to any provider who proactively shutters sites it considers to be infringers. Which means the MPAA just needs to publicize one list of infringing sites to get those sites blacklisted from the internet.Potential for abuse is rampant. As Public Knowledge points out, Google could easily take it upon itself to delist every viral video site on the internet with a “good faith belief” that they’re hosting copyrighted material. Leaving YouTube as the only major video portal. Comcast (an ISP) owns NBC (a content provider). Think they might have an interest in shuttering some rival domains? Under SOPA, they can do it without even asking for permission.]

Because SOPA is broader, even some companies who liked, or at least weren’t vocally opposed to, the Senate bill aren’t exactly delighted with the House version. 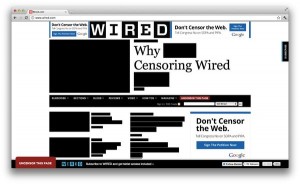 Wired.com’s image says it all!

We use cookies to ensure that we give you the best experience on our website. By continuing to browse this site you give consent for cookies to be used.